Alessandra Ferri, in “her own way” 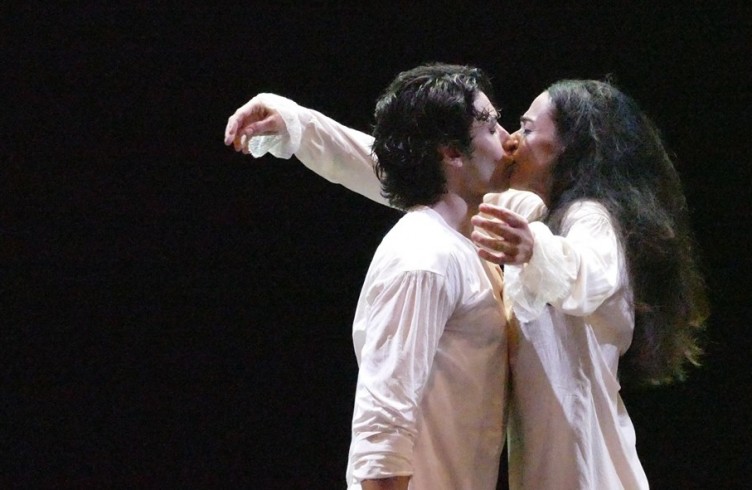 Alessandra “Coming back”: the departure for new artistic experiences. New emotions. New opportunities to change one’s limits for this self-innovating art, thanks to the courage of the ones who can call themselves into question and who can “dare” and go beyond the limits.

It’s what Alessandra Ferri is doing, in her own way. A voyage through words and images: the meaning of an artistic choice.
She’s wearing dancing shoes once again. And high heels, too. And, moreover, she can dance barefoot.
Alessandra Ferri was back, dancing and letting dance. Or better: she came back to her theatre and personal travel. She’s still loyal to that idea that has influenced her vision as an artist and as a woman during all her life.
“Life is made up of many beginnings”, she says. And this is a new beginning seriously, as she left the international ballet scene seven years ago. Then, she was buried with flowers at the NY Metropolitan Theater, cheered by an unstoppable standing ovation, at the Stadthalle in Hamburg, getting few presents and little food – as a goddess – at the World Ballet Festival in Tokyo.
Seven years is a long time. The public’s memory could get confused (it sometimes can become more and more brief).
New idols could be on the scene. And this is why Alessandra Ferri comes back: she represents a big lesson. A courage and perseverance lesson. Cleverness, curiosity, the capacity to put herself into question, to understand what is her real way, most of all.
Alessandra says her inspiration is called Mikhail Baryshnikov, a man who could change himself and pass through classic roles in post-modern ballet as well as through today’s physical theatre of Bob Wilson, seamlessly. The difference lays in that gap of time, the gap that Baryshnikov never really had to defeat. He never had to gradually accompany his public through the new roads of his art. And, then, Ferri is a dancer and actress with marked dramatic characteristics and with a high sensitivity, that makes her a “dancer of the atmosphere” (if you will). She can tell us a fully new internal world: thanks to one single gaze, with her body completely motionless. Authors and roles have to mark her unicity and this is a new challenge for her, because what she – reasonably – committed is not to go through roads she already knows. She wants to re-collect the ancient roles of cult with the blockbusters at the cass. “I want to dance me, myself, today” she keeps saying.
And this is how Lea emerges in her works, she’s aware, agée lover of Pischello Chéri, in the piéce for theater and for dance from  Colette  which was created two years ago by Martha Clarke, in New York. It will be performed soon at the Linbury Studio , of the London Royal Opera House.

Then, Virginia Woolf: on the first, triumphal work that a post-modern choreograph – Wayne McGregor – created at Royal Ballet. The Royal Ballet is the place where Alessandra Ferri started back to dance, after 30 years.
(“Wayne saw me while I was dancing Chéri and told me:
I need you.
Are you sure? I’m a theatre dancer and you’re a formalist.
I have to go further, you’re exactly what I was looking for.)

In December will be Eleonora Duse, a new performance, completely developed about and for her, directed by John Neumeier at the Hamburg Ballet.  The strength of her inspiration is still awesome, evidently.

Together with these new important creations, she appears in a new musical project,  Off Broadway.  She’s the guest of  Lar Lubovitch, the post-modern dance poet’s lover. Here she comes with her new adventure companion, the latin star  Herman Cornejo, they work together in projects such as Evolution. They were guests for the main Italian festivals about ballet, for example,  BolzanoDanza , Civitanova , Versiliana.  Other titles includes the Trio ConcertDance, on scene in New York, at the Joyce Theatre;  Preljocaj, with its flying hug in the kiss’ duet, Wheeldon, with its angelic and unending flights “Of the rain”. In the end ,Twyla Tharp  dancing on her fast and ticking heels, on a love duet without end, on the notes of “ My way ”, sang by Sinatra.
The new beginning of this artist is covered with energy, projects, promises, ideas. Curiosity, enthusiasm, desire to “have fun” and to “get a risk”.
“Now I dance who I am”. Alessandra tout court. “Because I’m dancer, I don’t dance. And, finally, I’m free to do what I feel, as a privilege of my age. I can be a dancer on my own way”, she demonstrates that her age, even for what concerns dance, can be a simple state of the mind, that maturity can give new perspectives to an art such as dance, that is changing its limits thanks to exceptional talents as Alessandra Ferri.

Previous post:
Women of Gaza – Photo feature by Giuseppe Cabras Next Post:
Fare-thee-well Khaled al-Asaad: a hero to us all

About the Author: Silvia Poletti

A graduate in Arts at Florence University with a dissertation in Latin Literature, has been writing dance reviews and essays of dance history for 30 years. Currently she is dance critic and journalist for Corriere della Sera/ Corriere Fiorentino, and for Danza & Danza magazine and web magazine www.delteatro.it. She collaborates too to cultural magazine www.wordsinfreedom.com. She regularly reports for Dance International Magazine ( Canada), Tanz ( Germany ) and Dance Magazine ( USA). Lecturer of Dance Studies at Venice Ca' Foscari University and at Urbino Carlo Bo University, Visiting Lecturer in Dance Studies at Florence University Arts Faculty and Urbino Carlo Bo University Foreign Languages Faculty. She is the author of John Neumeier ( l'Epos, Palermo 2004) and Kylian/ Ek/Neumeier ( I Teatri, Reggio Emilia 2006) and of the Chapter on Twenty Century in Storia della Danza Italiana ( EDT, Torino 2011)