Dario Argento and the Goblins: dreaming with fear

Filled Under: FILM AND MORE, ROCK AND POP, TOP, 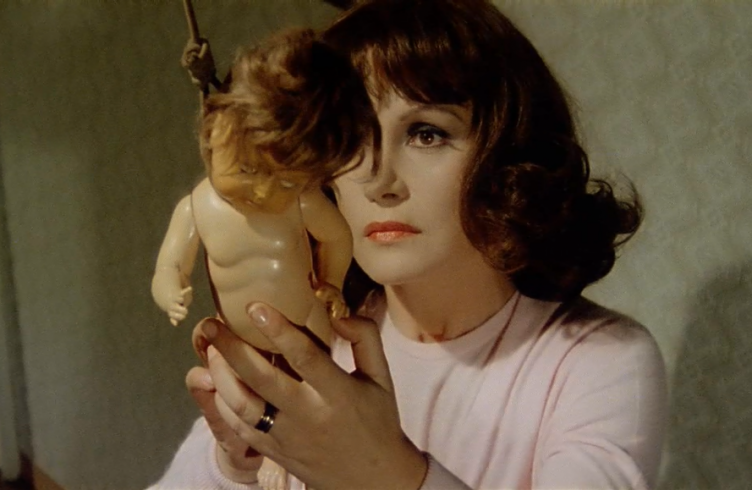 Deep Red is 40 years old and and it looks great for its age. An analysis between cinema and music of a masterpiece of the Italian cinema, as well as Argento’s stolen punchlines on July 19 2015 on the occasion of Fiesole prize for the Masters of cinema.

I was 15 years old, Profondo Rosso  (Deep Red) show was over : I had just received a precious investiture, that of a dog lover. Nearly Masonic, at the start, in the shadows of a hall in which I had in part entered illegally (the film was suitable only for adults),was Dario  dressing the part of ceremoy master . The mystery of cinema was being revealed to me and I already knew that an eternal journey was yet to begin. It’s like this talking about great authors. Yes, because Argento is one of the most important directors of our time.Deep Red, released in 1975, a scary daydream , an erotic immersion into the creepiest and most delusional violence, would have become a canonical text , not only for me.
Those who would like to identify Hitchcock’s, Lang’s irrefutable structure in this director are wrong. Blaming Argento for the incoherence of his plot, the alleged flaws of his script is useless. His way of doing cinema is a sensorial experience and this stage has to be lived, enjoyed and, if you want, interpreted. Like few other big names, Lynch and Jodorowski topping the list, he finds the fundamental answers in the cinema as a figurative, abstract and sapiential art: not a simple talking painting, but a voiceless melodrama taking place in a forest full of symbols. Argento takes the sense of image from the forgotten, the unknown, subordinates logic as he wants talk from the heart. Red as blood, deep as a precipice. It takes your breath away.
Like and more than other films by the director from Rome , Profondo Rosso (Deep Red) creates with its music an irrationally intense relationship, starting from the famous theme of credits, and it already became a synecdoche par excellence of his cinema and of the whole horror panorama.

If we try to listen to it straight away,we can appreciate a lot of its aspects. Above all its quality: well structured enough, it goes from even to odd rhythms as in the so-called prog-rock and it’s extraordinarily keen. As it used to be in the glorious song theatre of Weill and Brecht, cinema fades away, even if with fear, whistling it; it will never leave us anymore and that’s a considerable quality for a rhythmic, skipping and in the end hardly melodic motif. Interesting is the link with a certain idea of “classic” music: maybe a naive idea , chipped the edge off by the macabre tip by the filling of the cleric body, to symbolise the shadow of something imminent (a fault?), but undoubtedly efficient. To me this is a typical Italian trait, cinematographically purifying, not American; even if many American directors, like Paul Schrader to John Carpenter, would have studied and imitated the Goblins as well as Argento. Last but not least, the theme “expresses” the film with the same expressive colour, in a functional equity between those who take and get.

The history of this theme is not less adventurous than the plot of the film itself. 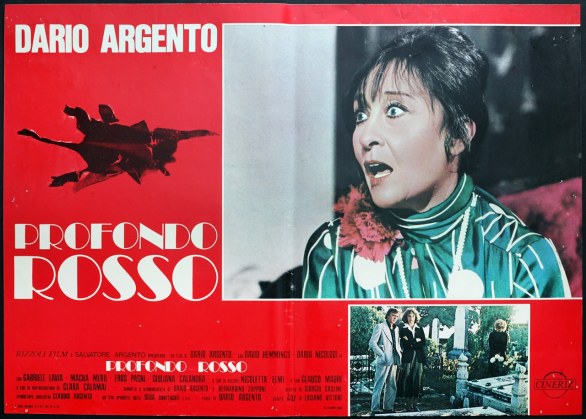 Deep Red,one of the fliers

Initially they say no other than Pink Floyd had to write the sound track, in 1970 they had worked with Antonioni in the famous Zabriskie Point. But the British band, refused the offer as they were recording their album Wish You Were Here, that came out in September that year,. Equally impossible was working with Deep Purple, though the director did try to work with the band on Four Flies on Grey Velvet. It was impossible for them to sign a contract due to usual bureaucracy. The jazz musician Giorgio Gaslini was then contacted. Not the Argento’s favourite hard rock but a good choice, at least on paper.

The protagonist in the film, Marc Daly, interpreted byDavid Hemmings, is a jazz musician from Turin who’s living a real enchantment due to a series of killings, in which he is hardly involved, but that he decides to pry.
From this moment on, and this is one of the strengths in the film, the protagonist’s ego, and the viewer’s one, doubles up and becomes a vanishing point and not a point of reality, from a nearly lacanian perspective. Even suspicion takes umbrage… but we won’t reveal too much, in respect of the lucky ones who haven’t watched the film and can’t discover it yet. We will then recall a sentence by Giovanni Battista Basile, “who looks for something he mustn’t look for , finds what he wants”.
Turning back to music, the director tells us : “ Gaslini started to work at the theme. He was a great jazz musician, but it was soon evident thet he hadn’t guessed the film. In the end, after discussing, he decided to stop working. To replace him, note that all the main topics were missed, I decided to choose a completely unknown band from Rome who struck me : The Goblins”.
deepred a more or less imprudent choice,different from the other. 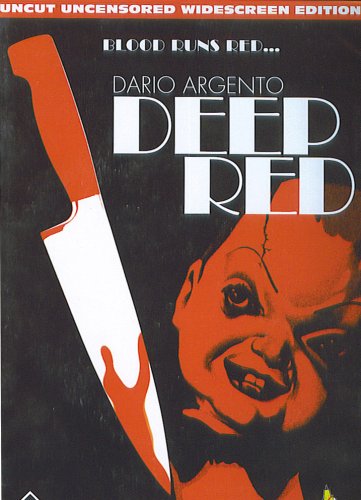 Headed by Claudio Simonetti, this quintet was formed by some  teenagers who had sent the producer in the past a demo with an      aromatic title, nearly tender: Cherry Five. Argento was really struck,  given that they seemed to embody perfectly that mysterious and  obscure energy that he meant to conjure in the film. To sum up,  knocking on wood, they were engaged. “But we were reckless, me to  contact them, them to accept ”, he jokes, “Apart from that we had  very little time, fifteen days max. Since we were really a bit of crazy  we knuckled down and in a hurry we finished the job, even before  the deadline !”.
The Goblins on this occasion were called to a double and not simple  task: reinterpreting some topics left unfinished by Gaslini and  writing some new. The result is history; about cinema, costumes  and a bit of music . Their collaboration would have gone ahead, in  an ideal esthetic and ethical union, through other films such as the  masterpiece Suspiria; the relationship with music would have  intensified as well for the director.
“For example”, Argento goes on, “I consider Opera to be among my  best works. It means a lot to me…but since the version released in  Italy is massacred by censorship, I noticed at a Festival an original  copy and I gave it to the Centro Sperimentale di Cinematografia  (Cinematography Experimental Centre) to get it polished and  restored”.
Deep Red is already a forty year old sir and fitter than ever. Apart  from viewing the film, I recommend to get closer again, far from  images, to the theme. Alarming, changeable, sexy, it’s still capable to  bring us on new ways, even now unknown ,tangible signal ofthe need for change, map of a journey in the name of danger we won’t maybe give up. In the sudden and incompatible snapshots of its movements, it’s a lively music, to drink all in one go.

About the Author: Massimo Giuseppe Bianchi

Italian pianist Massimo Giuseppe Bianchi studied with Bruno Canino. He performs both abroad and in Italy as a guest for some of the most prestigious musical institutions. He recorded for Naxos Girogio Federico Ghedini’s complete piano works, as well as chamber works by Riccardo Pick-Mangiagalli and Ottorino Respighi often including world premieres. He is a composer as well as a versatile improviser, and collaorates with distinguished musicians as Enrico Pieranunzi and Louis Sclavis.