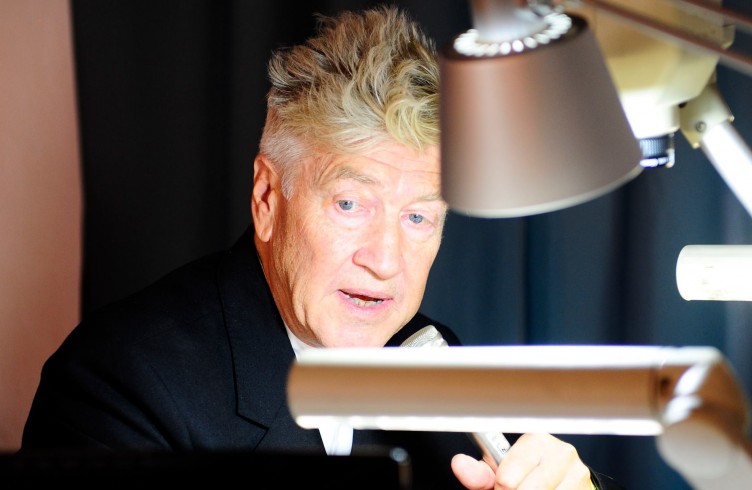 An exclusive interview with David Lynch. An unconventional interview, which is a result of  questions from students and teachers of a Lucca institute that Lynch hadvisited in 2014 whenhe was in town for the Lucca Film Festival. The connecting link between them is transcendental meditation. Since then, he regularly meets them via Skype, follows their evolution and their improvement. And so, tahnks to the students, teachers and   our collaborator Gianmarco Caselli, he agreed to talk about himself.

Mystery, the unconscious and dream like atmospheres: all of them are ingredients used by one of today’s most influential directors, David Lynch. The one from The Elephant Man, Eraserhead, Mulholland Drive, Twin Peaks, Wild at Heart. The thing that most people do not know about him is that, for years, he has been practicing transcendental meditation (MT), which is a technique brought back to life by Maharishi Mahesh Yogi that suggests to meditate twice a day for 15/20 minutes and that he, along with his foundation, the David Lynch Foundation For Consciousness-Based Education and World Peace , helps to promote all throughout the world. Just to mention a few, MT gets practiced by personalities such as Sting, Katy Perry, Sheryl Crow, Sean Lennon, Paul McCartney, Mike Oldfield, Ringo Starr, Clint Eastwood, Martin Scorsese and the less expected Rupert Murdoch.

In September 2014, Lynch was invited to Lucca for theLucca Film Festival. There he went to the Establishment of Higher Education Sandro Pertini (Istituto Superiore d’Istruzione  Sandro Pertini), where a class and some teachers had started to practice transcendental meditation inside the Star Bene a Scuola – Quiet Time project, sponsored by his foundation. Lynch meditated with them and then answered a series of questions in a more extended meeting. Since then, periodically via Internet, students and teachers meet Lynch and discuss the effects of meditation; during one of these meetings, with the director’s approval, this interview came to life.

David Lynch meditating in school in Lucca. Currently, the only experience in Italy.

How did you get to know Transcendental Meditation?

I heard about it for the first time when the Beatles started to practice it. I had no interest whatsoever in the Mt at that time, then I listened to an aphorism that said that happiness is not outside, but inside us. Time passed, one thing led to another and I started to think that maybe I needed some kind of meditation. I started to investigate, to read about that topic and I found out there are an awful lot of meditation types, even though nothing seemed to be fit for me. My youngest sister told me that she had started to meditate with Maharishi’s technique: I heard a change in her voice, she sounded happier and more self-confident. Putting it all together, I made up my mind and learned the MT: it has been 41 years now that I have been meditating and I have never skipped a day.

The relationship between unconscious and creative process is obviously tight in art. How did your work routine change once meditation established itself in your life?

Consciousness is like a sphere: every human being possess its own and they are of different dimensions and different sizes. That sphere, as we regularly descend, begins to expand itself: it expands itself with the constant practice of the MT. This way we are making the unconscious conscious. One day, thanks to the continuous practice of meditation, we will not have the unconscious anymore: it will all be conscious and therefore there will be the consciousness, the intuition of everything. This is the actual creativity and this is the actual happiness in life: being always aware of everything. The creativity that grows leads to an increasing ability to solve problems. True creativity is to invent new things. It increases the intuition, the pre-knowledge, the “before” experience. In each aspect of life, intuition is the main tool; but what does intuition mean? It means to know what is the right thing to do and be able to do it. Human beings have the ability to fully use their potential, that is to develop it completely. This ability could be expressed through one word: enlightenment, total expansion of the mind, complete awareness. And since this is a new thing that has been done in a school in Italy, it is like if you were pioneers.

When did you start to see some effects?

I was very angry, especially when I began: I blamed it on my first wife. Two weeks after the beginning of the meditation this rage had been gone. Needless to say, she was very glad about it.

So the meditation can help to fight depression or other ailments?

The MT helps human beings to go deeper down inside of them, in that level of life that is full of only positive qualities; there, there is unlimited intelligence, unlimited creativity and unlimited happiness as well. Energy, unlimited love, inner peace: from there you can affect on depression, because we enter a field of limitless welfare. Those who suffer from depression do not fight it, but when they taste some more happiness, depression goes away. You cannot oppose it, you can enlarge the welfare level. It is important to be constantly practicing, one time is not enough.

Is MT tied to some specific religious faith or can any religion be followed simultaneously?

Amazing question. MT is not a religion, nor is it opposed to any religion. It is a technique which allows every human being to dive inside of it. People of all religions practice the MT. The most interesting thing is that this deepest level has always been there. Modern science calls it the unified field, but it has also been called the ocean of pure conscience, it has been defined as “being”, or it has been called the absolute “level of pure knowledge”, the “Self”, “know thyself” is a famous aphorism from Socrates that you all know; it has been called the entirety, the source, the reality, the unity, the heavenly kingdom we have inside ourselves. There are many expressions with which this deep part of each human being has been defined, and it is possible for everyone to enter this profoundness. We are not born to suffer but to feel good and it is always being said that happiness is something we have inside.

How can we state that the mind is used in the material things of life?

This type of consciousness has many qualities: one of them is creativity itself. If one is already creative before starting the MT, this operates more and implements the creativity more. If you get more love from the inside, you will apply that love in your life. And it is the same if you get more energy: if you bring more intelligence and ability to understand, you will use them in your life. If, thanks to the MT, you release the stress, it will benefit your life. The ability we have to retreat negativity is an incredible advantage for the human being. We infuse gold from the inside, throwing away the dirt. It is a physical space that is filled with welfare and energy, instead of being filled with stress.

When you start the meditation you feel strong emotions, you acquire strong realizations; anyway, some months later it seems nothing happens anymore. Has there been, even if years later, another important change in your life that can be attributed to the MT?

Yes. Rage had gone away within the first two weeks, then I began to feel happier in my life. I began to feel stronger inside and most of all I was happier about what I was doing. I began to worry less about things. These effects present themselves gradually, continuously, they appear very naturally. You feel better and better. Do yourself a big favour: meditate regularly during the holidays and you will enjoy them a lot more. 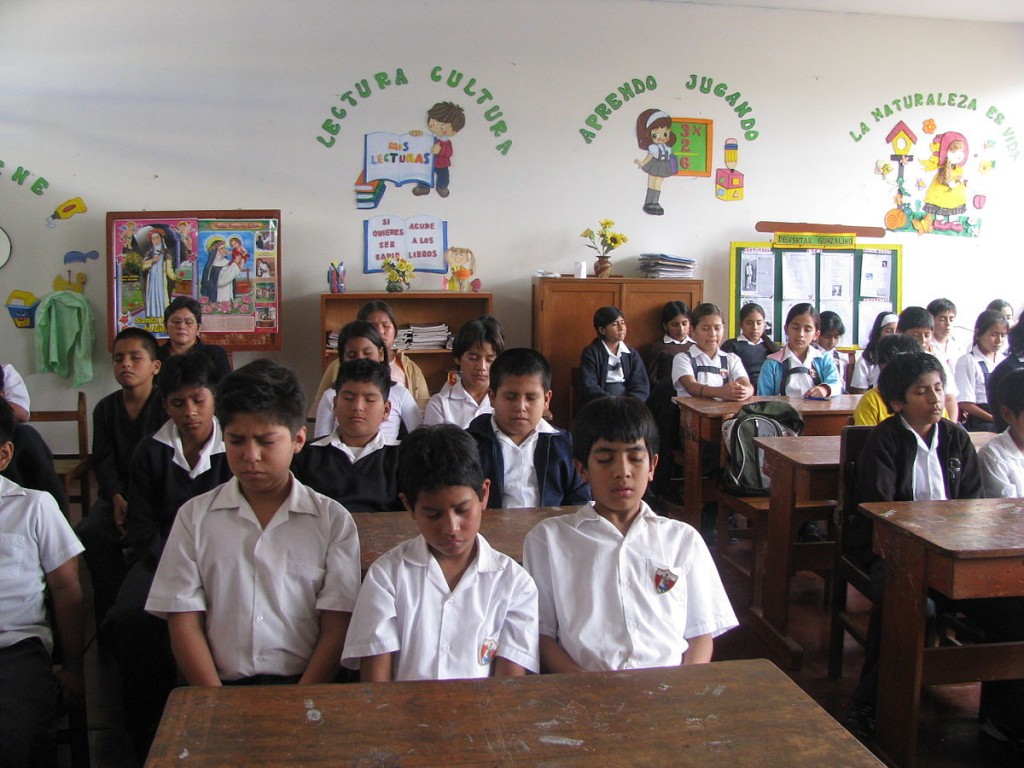 Transcendental meditation gets practiced in 2000 schools, even in Latin America, thanks to David Lynch Foundation. Here you can see a class in Peru.

Cover photo: David Lynch during the meeting at the Sandro Pertini school of Lucca. Courtesy of Marco Puccinelli.

Previous post:
In Bhopal 30 years after. Photo feature by Majlend Bramo Next Post:
“About Bobby Sands”. Interview with Seanna Walsh, the cellmate

About the Author: Gianmarco Caselli

Gianmarco Caselli is Italian and History teacher at high school. He is a composer and musician and organizes performances of electronic music; he worked as a journalist and has worked with various newspapers. He is artistic director of the Lucca Underground Festival. www.gianmarcocaselli.it, www.associazionevaga.it