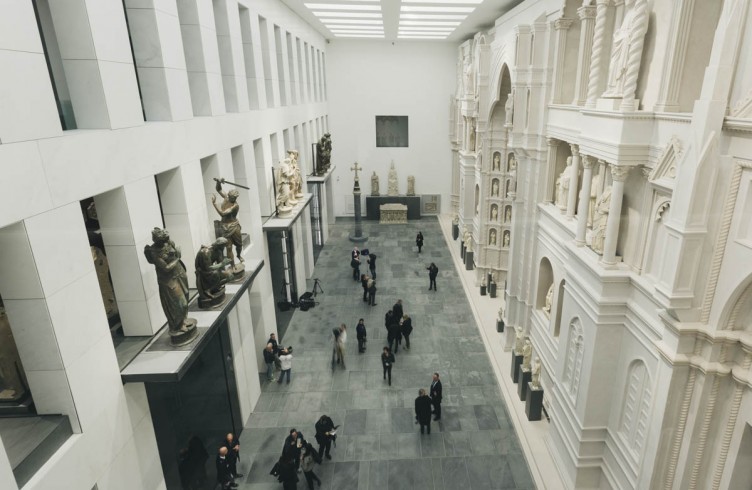 It is not parochialism, it is the portrait of a unique age of the human history, a cornerstone for the Western culture. That now shows itself, with the strength of evidence, in a nodal passage when the Middle Age curls in its flows, smells of Rome and Athens and blooms in the Renaissance season. There are no violent cuts in the history of art, but a continuous nourishment spread by the culture that pollinates the creators. It will be inaugurated on the 29th of October, after three years of work and a 15-year project. To revolutionize the heart of Renaissance, with the façade of Santa Maria del Fiore, destroyed in 1587 by order of grand duke Francis I, rising from its ashes. While Lorenzo Ghiberti knew he had to converse with the one made by Arnolfo di Cambio. Now, in the Paradise hall (the ancient Teatro degli Intrepidi, purchased by the Opera in 1998, when after several steps, it had turned into a singular and avant-garde garage), that historic and incomplete façade, the most beautiful and real that the Duomo has ever had, as the architect Nadalini has pointed out. It is born again along with the unbelievable original apparatus of sculptures. There, in front of the two doors of the Baptistery, fused together by Lorenzo Ghiberti. In the end of the renovation, also Andrea Pisano will come. An exposition room of almost 6000 square metres, an overall investment of 45 millions, 200 renovated works, 750 works in total: some of them were believed to be lost. 25 halls on 3 floors, an amazing terrace over the dome, Donatello’s Penitent Maddalene, Michelangelo’s Pietà, Donatello’s Cantoria in front of Luca Della Robbia’s Cantoria, but also a series of Renaissance models and projects and the nineteenth-century papers. If apparatuses and models for the building of Brunelleschi’s dome were not enough for you. A respectful and spectacular setting, a philological visit that gives emotions, but that can also be a moment of learning. A moment to lose yourself in that sphere of influence, when Florence really was a “world”. The great museum of the Opera del Duomo, go to the website.

Previous post:
Short end or long end? Here’s the game of the “head of the table” Next Post:
In Bhopal 30 years after. Photo feature by Majlend Bramo