From Britten to Blow Up and even more: about David Hemmings

Filled Under: CULTURE, FILM AND MORE, 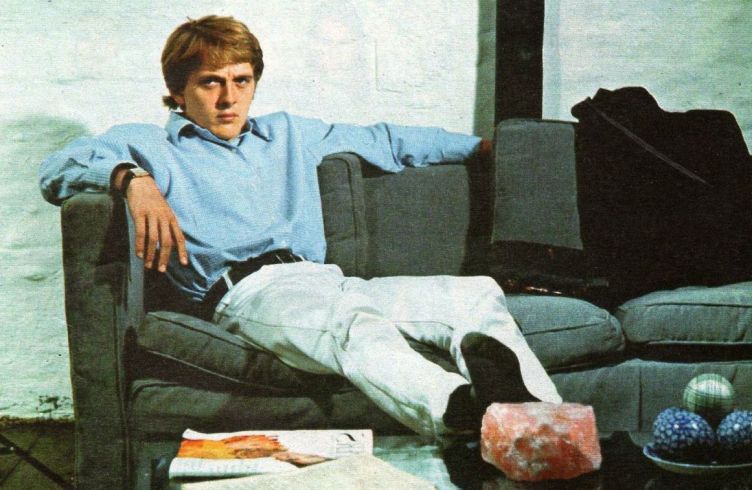 The 40th anniversary of Profondo Rosso (Deep Red) is the perfect opportunity to sketch a portrait of the protagonist, David Hemmings. His carrier started as a treble, protagonist of The Turn of the Screw by Benjamin Britten; a disturbing opera and a relationship full of questions, likewise disturbing, between the 12-year-old protagonist and the composer. So, after the sharp analysis of the soundtrack by Massimo Giuseppe Bianchi, here is the portrait full of hints and cues of the British actor by Elisabetta Torselli.

Profondo Rosso by Dario Argento celebrated his 40th anniversary and Massimo Giuseppe Bianchi goes along the story of the famous soundtrack by Goblin. In keeping with this fascination, now let’s talk about David Hemmings, the principal actor in Profondo Rosso where he plays the role of the jazz pianist Marc Daly. 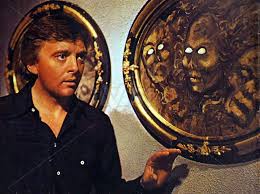 A scene from Profondo Rosso

David Hemmings’ artistic life was extremely rich and dynamic (not to mention his private life: four wives and six children), recalled in his autobiography Blow Up… and Other Exaggerations. A life ended too soon: in 2003, at 62 years young, Hemming’s died from  a heart attack in Bucharest on the movie set of Blessed,  a sort of new millennium version of Rosemary’s Baby (but without Roman Polanski…), as if to confirm his fate and his inclination for metaphysical thriller, for crime, for neurotic and psychotic stories and other disturbing narratives.

A decade before Profondo Rosso David Hemmings was, as every cinema fan recalls, the protagonist of  Michelangelo Antonioni’s Blow Up , taken from a tale by Julio Cortázar, The Devil’s Drool, which is really worth reading.

Let’s take a step back: at Venice Biennale Musica on 14 September 1954 took place The Turn of the Screw, Il Giro di Vite, by Benjamin Britten, based on the eponymous novel by Henry James. Everything revolves around the kid Miles, apparently engaged in weird and secret trades; the story is about him and his sister Flora, together with the wicked ghosts of two dead servants, Quint and Miss Jessel, and a young governess who tries to pull them away from that fascination. In the last scene, the woman makes Miles curse the ghost of Quint, but his heart is weak and he dies.

Quint’s role was originally conceived for Britten’s partner, the great tenor Peter Pears. For Miles, Britten could choose among the treble voices, the young boys musically raised in the famous British choirs in cathedrals, colleges and chapels. Benjamin Britten chose without any hesitation the twelve-year-old David, who was part of the Royal Chapel at Hampton Court. He went to the audition with a poetry by Robert Browning and then sang the most famous aria from Handel’s Semele:“Where’er you walk“.

The Turn of the Screw is the work in which Britten overtly manifests his obsession, which causes embarrassment in his biographers and enthusiasts, but this obsession is clearly at the root of his own art. The very young male protagonist and the treble voice are the core of many Britten’s scores, theatrical, choral, symphonic-choral; and the constant need for young singers brought to constant contact with young boys, and one of them, many years later, ended up talking explicitly about sexual abuses. This whole story was recreated by John Bridcut in a book, Brittens’ Children published in 2006, preceded in 2004 by a BBC documentary.

Hemmings in The Turn of the Screw by Britten, Hulton Archive/Denis De Marney

In Bridcut’s documentary, among the witnesses who defended Britten, the most important was precisely the by that time 60-year-old David Hemmings. He stated that Britten loved him “like a father, not like a lover”, and he deeply loved Britten: he defined himself “more heterosexual than Gengis Kahn”. He admitted he slept in Britten’s bed a night that he was too afraid to sleep alone, and ended up remembering The Turn of the Screw as the best period of his life.

In fact, the opera was so successful that there were many repeat performances all across Europe, almost always with Hemmings as Miles.  But the boy was growing up and his voice was about to change. In 1956, during The Turn of the Screw at Théâtre des Champs-Elysées in Paris, Hemmings’ voice broke. Oddly it happened during the performance of the most famous Miles’ part, resonant with the deep ambiguities of the story: his weird and veiled confession and request for help, “Malo”.

The break of his voice corresponded to the break of his artistic relations with Britten. But Hemmings, in the following years, developed a strong passion for music (he played guitar and piano) and for art and he also plunged himself into cinema and television, he was requested for roles as schoolboy, little hero, introverted adolescent, alien creature, going from the sailor boy of Sink the Bismarck! (Lewis Gilbert 1960) to the troubled young man of Painted Smile (Lance Comfort 1962), from the suspect alien of an episodes of Counterfeit Man (1965) to the weird blonde archer, Sharon Tate’s brother, in Eve of Devil (J. Lee Thompson 1967).

But it was above all Blow Up that enhanced his perturbing and almost timeless beauty, with his very distinctive gaze, which very often threw him in the middle of mysterious stories, as protagonist, witness or mystery hunter. His aspect was perfect also for costume drama films, historical or fantasy. As the Knight of the Round Table Mordred in Camelot (Joshua Logan 1967), the fervent Cavalry Captain in The Charge of Light Brigade (Tony Richardson 1968), the alluring Martian in Barbarella (Roger Vadim 1968);

With the passing of time, his name was not among the first listed in the posters or in the credits anymore, as his beauty was losing its juvenile mark, and his roles were different, even though very well-defined, he played a Victorian gentleman and very important cameo roles: Cassio in Ridley Scott’s Gladiator and Mr. Schermerhorn in Martin Scorsese’s Gangs of New York.

But how many people would have recognised in these cameo roles the protagonist of Blow Up? Very often, British celebrities, aging, seem to retain their cold charm of adolescents withered by their refined dissolute lives, let’s think about Peter O’Toole or David Bowie. But this is not what happened to Hemmings, who just aged, as the majority of people. Whatever Hemmings felt about this transformation, the photos of him at 60 years old show us a calm man, without any trace of the typical, gloomy restraint of the former beautiful celebrities. Probably it was because he knew that his life and his career were something more, with plenty of chances, and he took them all, also meeting some critics and disappointments. And when Hemmings died all the mean critics seemed, with very few exceptions, to have forgotten the many things he was: the protagonist of one of the best moment of 20th century musical theater; the winner of a Silver Bear in Berlin, Marlene Dietrich’s last director… But first things first.

As to music, he went beyond the episode in The Turn of the Screw, from the studio LP David Hemmings Happens, recorded in 1967 in Los Angeles, to the participation in different roles in important episodes of progressive rock history. There was also an unsuccessful tour in musicals; during the Profondo Rosso period, Hemmings played the part of the protagonist in Jeeves, one of the few unsuccessful musical by Andrew Lloyd Webber, at West End theatre: the protagonist was a weird character, the harmless and scatterbrained British aristocrat Bertie Wooster, who was always saved by the brilliant, stern and extremely refined butler Jeeves (played by Michael Aldridge, in the photo below with Hemmings), the most famous creation by the amazing writer Pelham Grenville Wodehouse. 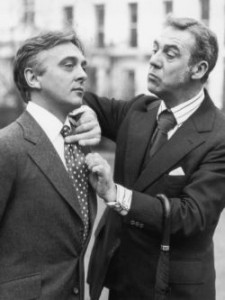 Hemmings and Aldridge during the rehearsal of Jeeves, Getty Archive

One of the rare exhibits of that unsuccessful musical, Today waltz, reveals that Hemmings could still sing.

He had another passion, in its entirety unsuccessful, but doomed to leave a trace in history: direction. An important debut, a Silver Bear in Berlin with The 14, based on the destiny of a group of orphan little boys. And then the great challenge: Just a Gigolo (1978), a film produced in Germany, important because marked David Bowie’s return on screen after The Man Who Fell to Earth, and the farewell of Marlene Dietrich, who played the role of the Baroness of a refined brothel. In this brothel the former Prussian officer David Bowie was recruited, to the delight of mature ladies, in a post war Berlin, starved and depraved, where people could still hear the shootings among the already defeated communist militants and the rising Nazis. 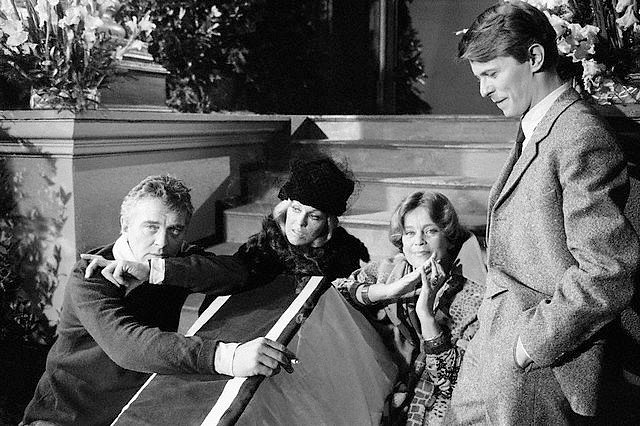 Hemmings on Just a Gigolo set, with Bowie, Kim Novak and Maria Schell

To Hemmings’ greatest displeasure, the film was much criticized, above all for the ironic and anti-heroic way of dealing with such a tragic historic subject, in spite of Bowie’s charisma and Dietrich’s truly extraordinary charm, both in her cameo role and in the very famous song (composed in 1929 by an Italian, Leonello Casucci, pianist in a tango orchestra, known above all for Julius Brammer’s German lyrics, immediately translated into English with the title Just a Gigolo).

Yet, we do think the film deserves a revaluation, for the attention to the setting, the solidity of narrative structure, the extraordinary cast, which also includes Kim Novak, Sidney Rome, Maria Schell, Curd Jurgens and of course Hemmings, and for the great soundtrack, which reminds of the jazz from its origin and the Berliner cabaret, with the collaboration of groups as Manhattan Transfer and Village People. Rediscovering and watching again this film paying particular attention would be a fitting tribute to a polyhedric and generous artist. 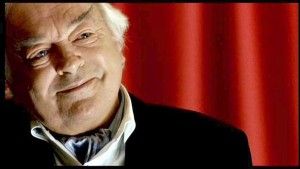 About the Author: Elisabetta Torselli

Elisabetta Torselli lives in Florence and she is the teacher of Poetries and Musical Dramaturgy at the Conservatorio di Musica “Jacopo Tomadini” in Udine. As a musical critic she writes for the magazine “Il Giornale della Musica”. From 1989 to 2013 she wrote for the newspaper “L'Unità”.