Il Generale and his “Hymn of the jobless” 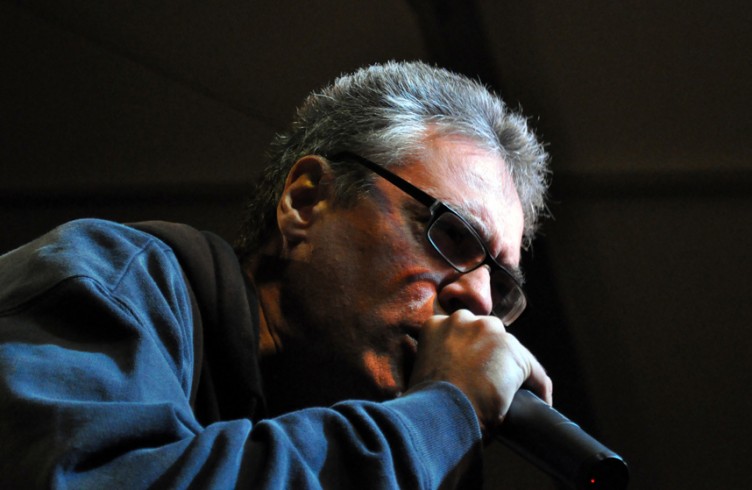 “L’inno dei senza lavoro” is the new single by Il Generale, the so-called “grandpa” of Italian reggae. We interviewed him at the time of the release of his latest album “Canzoni di tempi di crisi” (Songs about times of crisis)

Once there were the workers’ hymn, the class struggle, the working class. With the advent of modernisation the class struggle is over, but actually there is no work. And now temporary workers’ party is replacing the working class. Il Generale has composed its song of struggle and solidarity, “L’inno dei senza lavoro” (The hymn of the jobless), the first single from his latest “Canzoni di tempi di crisi” (Songs about times of crisis), the ninth album in his 30-year reggae career.

We interviewed him in his hometown, Florence, for which he wrote rhymes and upbeats and to whose football leader in the late 80s, Roberto Baggio, he dedicated the single that gave him his first national fame. Sipping a cup of coffee, we talked about the glorious period of the Italian Posse movement, as well as the current music scene. And there’s also an announcement that will make all fans happy. 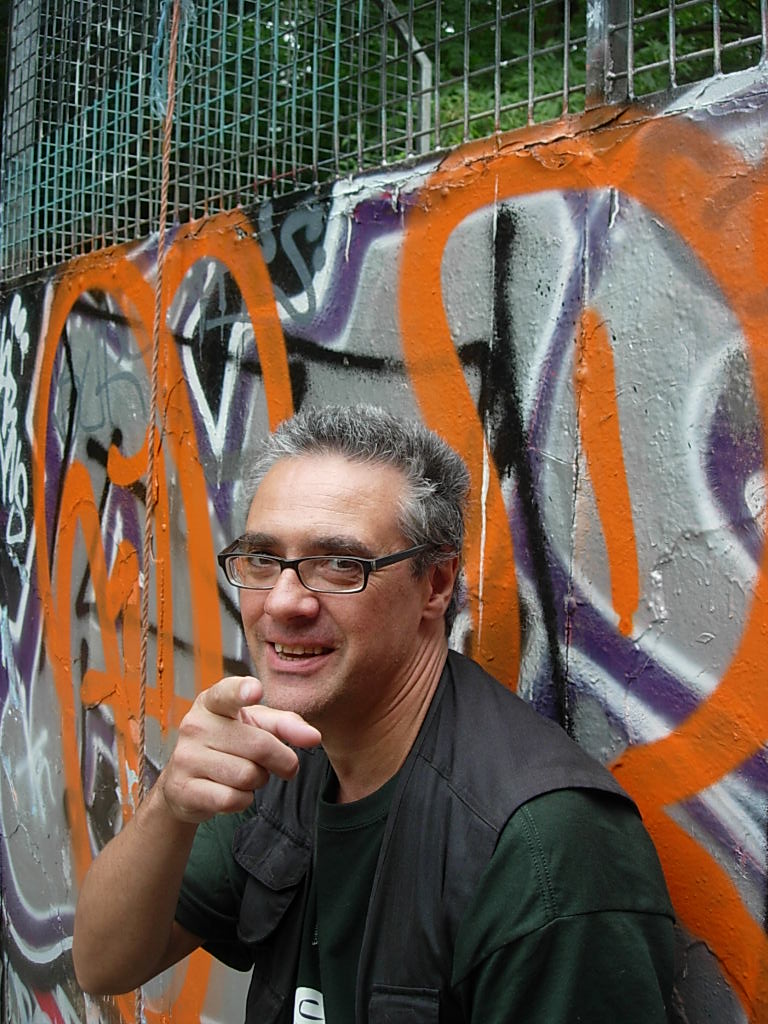 The title is very important. Perhaps it might seem strange using “songs about times” instead of “songs in times”. But the meaning I wanted to convey was actually that the 14 tracks are the result of the tragic period we are living in, and all together they form a collage of feelings coming from personal experiences. Nonetheless, the songs are not depressing or pessimistic: as in the best reggae tradition, I went beyond the sterile complaining and aimed to send a message of optimism.

Your new album lyrics do not include the usual references to marijuana or to your hometown, but they are about temporary workers, violence against women, paedophilia, corruption. Is it your most political album?

I’d say it is the most mature in terms of music and above all lyrics, which go along with my personal experiences, showing a continuous growth. About Florence, you are right: I was always accused of being too focused on “Firenze” 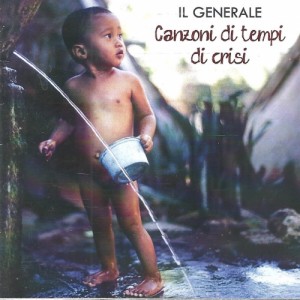 Apart from the distribution, Goodfellas, you are supported neither by a major label nor by an independent label. Instead, you launched a Crowdfunding campaign. Can you explain it?

That’s right. I worked both with major labels, as RTI, and with indie labels, as Wide. The problem is that the crisis has completely revolutionized the music market, destroying all the little labels. So I decided to bet on myself and I came up with this idea, which I discovered in 2000 during a trip in Senegal, where women-led businesses turned to some form of microcredit to finance their activities.

And you brought it into the music industry…“Mille modi”, all my latest albums have been realized through crowdfunding campaigns. A sort of self-production, going door to door to raise some money. I ask all my reggae fans:: are you interested in buying my new album? Good, bet on me! If you pre-order it – without any fixed cost – you will be among the actual executive producers and your name or logo will be in the credits on the cover. Every one contributes in his/her own way, by not only giving money but also providing graphic of photographic work. Speaking of which, I want to especially thank Giampaolo Semboloni and Ulisse Donnini for their work.

Did you set a goal for your “Canzoni di tempi di crisi”?

No, I did not think about figures and numbers, if that is what you mean. But we can say I do count on it, because I reckon this is one of my best albums and, obviously, I ask everyone to give me an opinion about it. Anyone interested in my album can download it from the internet, go to a record shop – if there are some left – or contact the distributor Goodfellas or me on my Facebook profiles Il Generale e Stefano Bettini.

The first single is “L’inno dei senza lavoro” (The hymn of the jobless). The message seems to be very clear…

The song is dedicated to every person in this situation: unemployed, young people looking for their first job, workers on redundancy payment, temporary employees. The crisis has not spared anyone, and I personally know what that is like. As a musician, for years I’ve had tempoary jobs by choice… But now it’s not my choice anymore.

In your amusing video, which our readers will find above, you are thrown out of an office after a job interview. Has it ever happened to you?

No, I was never kicked out, but plenty of times I was told: “What are you doing here? You are too qualified for a place like this…”

Let’s go back to the previous topic. Many artists take a dim view of major labels’ strong influence: how was your experience at the time of “Guarda la luna e non il dito”?

(He laughs – Ed.) That was “The Great Rock ‘n’ Roll Swindle” or better “Reggae ’n’ Roll” in my case! RTI meant Berlusconi and I was initially sceptical, inevitably, also because back in those years, the mid 90s, there were many discussions whether collaborating with a major label would mean to sell oneself. As if producing something “with money” were a crime!

Personally, I’m not snobbish and my experience was actually good. I had the chance to speak freely about legalizing soft drugs, for instance, and that album – between you and me – was very high quality. What if a major label got back in touch with me? Well… holy smoke, I’d say yes!

After that experience, though, you did go back to an indie label…

That’s true, but it was not by choice. After “Guarda la luna e non il dito”, I wanted to take a break from music in order to dedicate my time to some other personal projects. Firstly my PhD. Then, when I was ready to dress the part of Il Generale again, music industry was on the verge of a crisis and the glorious indie market of the 90s was over.

Right, the 90s… You were one of the protagonists of the Italian Posse movement, how was that phase of your career?

It was great! (TN.: He used a typical Florentine expression: A tutto fuoco!) During my experience as a musician, I was lucky enough to live three great periods: the movement of 1977 with its self-productions; the following punk/hard-core movement of the 80s, a niche segment in Italy but with a strong distribution channel and appeal worldwide; lastly, the 90s and the Posse, when there was always a label supporting you. As a member of the group I Refuse It, I belong to the first two movements, as Generale I lived the last phase. And I’ve kept in touch with many colleagues: firstly Madaski and Africa Unite, but also Lele Gaudì and Sud Sound System. Let me tell you something: whatever people think about it, among rappers and ragga soldiers there has never been competition to get more exposure, but always a great support.

What about current Italian reggae?

Too tied to Jamaican models, starting from the use of the language. We were way more original.

Generale, we are almost at the end of this interview. Now it’s time for the prosaic question: what are the future plans of the “grandpa” of Italian reggae?

That’s the most welcome question! For the thirtieth anniversary of my career as a reggae artist I have a gift for all my fans: by the end of the year “Bulebai: 30 anni di stile fiorentino 1985-2015” will be released, it is a collection of old unreleased tracks, B-sides, live performances and other rarities only available on compilations. For those who do not know my story: in 1985 I released my very first single as Il Generale, whose title was “San Marco Skanking”. 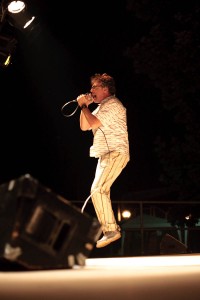 This will make all your many fans all across Italy very happy. But, out of curiosity, who gave you the nickname “grandpa of Italian reggae”?

Actually, it was a sort of self-identification! After all, I was one of the first reggae artists in Italy and the first one ever to release an album entirely in Italian.

Now, the very last question and you won’t like it… You became famous in 1989 for the single “Non è un miraggio! Roberto Baggio”; when will you dedicate a new track to Fiorentina (TN: Florence football team)? Maybe a song to celebrate the third Championship victory?

Ow… I’m very superstitious and I do believe in misfortune, so as this is a magic moment for the team, I’d better wait. And in the meantime let’s enjoy it!!

All the photos were kindly provided by the artist.

About the Author: Maurizio Melani

Maurizio Melani is a journalist, a press officer and a teacher of Etiquette 2.0, Business Communication, Restaurant Start-Up. At the beginning of 2000 he was an events maker in music business and organized hundred concerts for Italian Indie Rock bands. He’s also a Wine sommelier and a Honey taster and writer. In 2013 he published the book “Piccola guida di educazione a tavola” (ed. Le Lettere) about etiquette and good table manners. He likes black/white cinema, rock music, art and sport