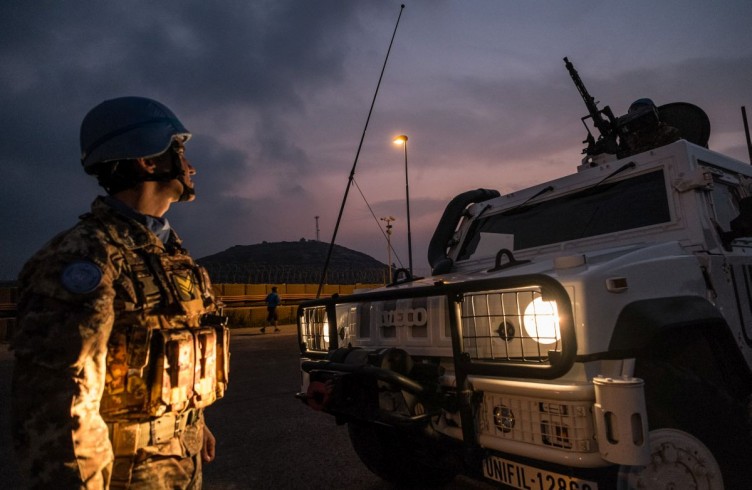 What is a peacekeeping mission? What does life look like during those six months away from home? In March 2015, Giuseppe Cabras went to Lebanon with the Italian soldiers and recounts the experience through his words, but especially with his powerful images.

In Lebanon the word “Peace” is written in Italian. More than one thousand Italian soldiers are deployed in the mission called “Leonte”.

Peace in the Middle East is linked to Italian peacekeepers in Lebanon. The one thousand-one-hundred Italian soldiers lined up on the head quarters of Shama (Simeon in Arabic, it is not pure chance the city is where the holy prophet of the Bible is buried), and in other towns nearby, are indeed presiding the Blue Line: the line separating Lebanon from Israel, realised to ensure the peaceful living together of the two countries that have virtually been at war since the late forties. A huge international contingent, more than one thousand soldiers from eleven countries and a logistics organisation that even Nasa would envy.

The Shama compound is where the men of the operation “Leonte” live and fight, when necessary.

At the beginning of 2015, frictions with Israel worsened again and resulted in an exchange of fire with Hezbollah; a Spanish peacekeeper fell dead.

It is only in this base that the complexity of leading an international peacekeeping operation can be understood. The operation needs to be efficient and to contribute to keeping peace in a Middle East country, without being subjugated to a logic of clashes, divisions and violence, in a place where religious extremism has not found its way into people’s life and where the population, after 66 years of war, only wishes to exist and thrive.

The Shama base faces the sea from a hill, the raising of the flag wakens the activities, and the patrol squads covering the Blue Line, the disputed border with Israel, strictly monitored on both sides, relentlessly come in and out of the gates.

Enabling the reconstituted Lebanese army to be deployed to protect the borders and watch over them so that new accidents would not lead to an escalation of violence with Israel is part of the 1701 UN resolution that originated the mission in 2006.

The said mission should only terminate at the laying of the blue pillars – cement pillars painted in blue that mark the border – and when the reconstituted Lebanese army trained by our experts will become autonomous and will be able to keep control of the borders and of the internal issues related to Hezbollah alone.

The recent episode of 28th January 2015 that killed a UN soldier patrolling in the area controlled by the Spanish troops led to an increased alert level, even if in the Italian headquarter, the commander, Brigadier General Del Col,  said he hopes it was only a tragic accident. For this reason, embedded journalists and photo reporters are always escorted and go around on armoured vehicles: from the well-known Lince, to the less known but reassuring “Blindo Centauro” two-wheel tanks. Opportunities to see what happens outside the base are rare. That is why the life of the men on the mission becomes attractive and interesting, and the opportunity of capturing intimate moments of their day needs to be seized.

One hundred different professions are available for the media: operational soldiers, logisticians, administrators, doctors, relations experts and technicians in every sector, who are spending their six-month missions between shifts and well-deserved rest.

The presence of the Italian contingent is also important for the local population: many Lebanese knock at the base’s door to receive medical assistance. They are not covered by the health care system, which is private, like in the US, and does not cover the underprivileged.

In Al- Mansouri base, a few hairpin turns downhill form the Shama UNFIL headquarters, every day the doctors are faced with emergencies caused by domestic accidents, and supply medications to those lacking or in need of them. A medical commander from the Puglia region  took his phone and showed us the pictures of a little girl with severe burns who was able to resume a full life thanks to the assiduous and competent care that she would have never received otherwise.

The gratitude of those who receive help pays back the army doctors and the pride of doing something good for free, gaining back affection and smiles, transpires from their eyes and words.

These men (and women) live side by side, away from home during six-month shifts, motivated by the spirit of the mission and not only, as it would be easy to suggest, by benefits proportionate to an international mission.

Here élites alternate, and it is easy to understand it by living with them. At the end of every day, after the Italian flag is hauled down, always framed by magnificent sunsets, as the Armenian sentinels start their shift and the rumble of the engines of a patrolling squad setting off can be heard from afar, the personnel of the base relax, the canteen is filled, as are the bars, the gyms and any other shared space. Husbands, wives, partners, children: some call home on Skype, some put their uniform away and relax in the rooms, some exercise, some watch a football match of their favourite team on TV, sitting on the bed with anti-explosive dog that accompanies them in service. A home far from home, a feeling supported by this contingent belonging to the same brigade, the “Pinerolo” brigade based in Bari and currently deployed on the operation Leonte XVII. Those who take part in the mission know that without the generous commitment of the UN forces, the country would be at the mercy of violence and interference and the population would suffer again, who knows for how long. The common feeling of uncertainty leads one to wonder what would happen to this country if the UNIFL peacekeeping mission was not protecting the fragile Lebanese truce.

Previous post:
From Britten to Blow Up and even more: about David Hemmings Next Post:
Ken Loach and the ruthless England of the new poverty

About the Author: Giuseppe Cabras

Travel and underwater photographer since 1995 with publications unspecialized magazines, journalist since 2001, I work since then with the QN La Nazione group, initially through the Fotocronache agency and later with the New Press Photo agency, always in Florence. Working since 2008 as photographer and publicist in sports, specialized in mountain biking and long skate. As a photojournalist I work on local and national publications with the QN ground on the most popular italian magazines. In the last three years my interest has shifted on the problems of the human society and its conflicts. In 2013 a reportage in the Gaza strip and in the palestinian occupied territories of the West Bank has opened new horizons.